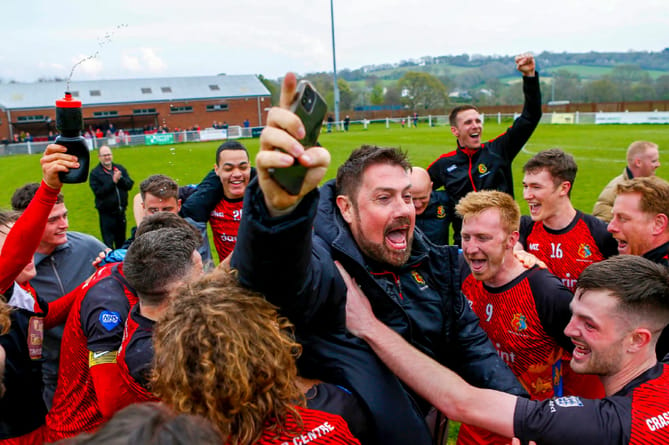 TAVISTOCK manager Stu Henderson has taken time to reflect on his side’s title-winning campaign this week.

Following the publication of the league allocations by The FA, Tavi have officially been promoted to the Southern League Division One South.

At Step Four of the non-league pyramid they will join fellow Devon sides Bideford, Willand Rovers and Exmouth Town – the latter having followed them up from the Western League.

On the way up the Lambs pass Barnstaple Town, who finished bottom of that league last season and have been relegated.

To set up their success, the Lambs shook off a sluggish start and went on a mammoth 22-game unbeaten run between mid-September and late February.

An unexpected defeat at relegation battlers Ashton & Backwell United ended that stretch, but with just one more league loss – away at challengers Exmouth in their penultimate game – the league trophy was eventually lifted at Langsford Park.

Henderson’s men also finished as the division’s highest-scoring side, thanks in no small part to Liam Prynn’s haul of 41 goals from his 37 games.

‘It was a massive achievement,’ recalled Henderson this week. ‘Most people know that in local football we don’t have a big budget or the greatest resources.

‘We lost four or five players on the summer months too, the likes of Jack Crago and Reece Shanley, so really we’ve done it against all odds.

‘Injuries and COVID disruption meant that pre-season was just a mix-match of players so that we could get fitness levels up. We even had to borrow players for our first game against Saltash.

‘But this group has never finished outside the top two of a league we’ve been in while Kenny [Ord, assistant] and I have been in charge. We knew once we were in the rhythm of things we’d be okay.

‘We lost 3-2 at home to Helston at the start of September and we were really poor. A few things were said in the changing room afterwards and then followed a 22-game unbeaten run.

‘That was the catalyst for our success in the end. We had a bit of a wobble in February but we finished strongly.

‘Exmouth’s pitch is ridiculously poor but we went up there with a game plan which was working really well – until we conceded a soft free-kick.

‘But we knew that going into the final game we just had to match what they did. With us both drawing 0-0 nearing full-time that would’ve been fine, but getting a late goal for us to win was a bonus.

‘Even once we’d won, I just wanted to find a corner and go to sleep. I was absolutely drained – the players were too, but at least they can run around and effect things.

‘It was gruelling but we got through it – four games in eight days is something even the pros wouldn’t do. I’m so proud of the group.’

Looking ahead to next season, Henderson admitted that despite the excitement of playing in a new league, the club does have some concerns – and needs more support.

‘I’ve said it for years, we’re punching well above our weight – and we need people from the surrounding areas to support us,’ he said.

‘Plymouth Parkway have been getting crowds of four or five hundred, whereas we’re lucky to get 200 sometimes.

‘Having more than 400 there on the final day was good because it shows the potential, but we need to be getting that more often.

‘We also need more people to buy into it behind the scenes at the club.

‘We’ll be asking players to travel the length and breadth of the country for very little financial recompense. Expense in terms of travel is definitely the biggest fear.

‘But all of that being said, I am excited and it should be a great experience.

‘The standard is going to be good and with a few new additions we should have a good platform.

‘Being at that level also opens the door for loanees to join us from professional clubs, so that’s something we’ll be exploring too.’