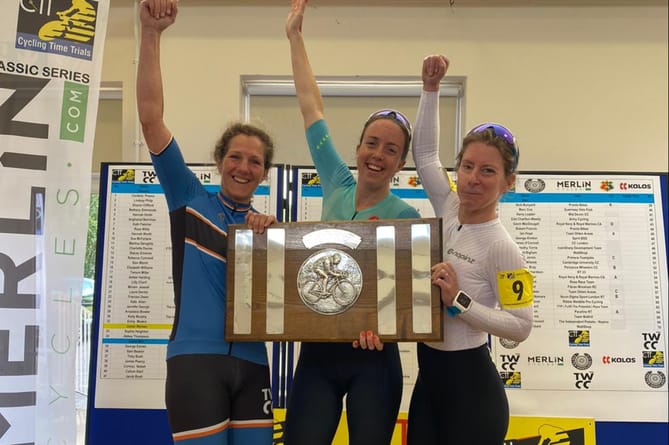 Tavistock Wheelers’ Ladies’ Team, comprising Hannah Worth, Kath Fletcher, Hannah Smith and Cordelia Preece, helped secure the team prize in the National 25 mile TT Championships this weekend on the rolling S130/25 course that straddles the border of Devon and Somerset.

The time was taken from the first three home of the four-lady team. Tavistock Wheelers now have national champions with their names being engraved onto the very prestigious trophy. Former winners include Beryl Burton.

The event headquarters was at Uffculme. The Tavistock Wheelers coincidentally organised the ladies’ and juniors’ event on behalf of the Cycling Time Trials National Council and the South West District Committee.

This was once again a first for the club. Tavistock Wheelers were supported by Exeter Wheelers and this was reciprocated for the following day’s National Men’s Championships.

The event itself went very smoothly with everyone returning home safely. This doesn’t happen by accident. The event was 18 months in the making.

Tavistock Wheelers were supported by a big team from within the club and they had to manage the logistics of staging an early morning event 70 miles away.

The event didn’t go without some anxiety for the organising team. A set of three-way temporary lights appeared last Thursday. This was spotted on Friday by the team and following multiple phone calls, the lights were finally removed at 1.30am on Saturday morning, meaning the event could now take place.

Tavistock Wheeler Cordelia Preece was given the honour of going first in the ladies’ event.

Tavistock Wheeler Matt Luxton was also given the honour of going first in the men’s event. Luxton even managed to return home first in a very quick field.

There was other local interest with Bere Alston’s James Pearcy taking part in the Junior event, with third place, and Bridestowe’s Gavin MacDougall going under the hour in the Men’s event.

Kelly Murphy (The Independent Pedaler-Nopinz) was fastest of the Women, while Abbey Thompson and Jacob Bush secured the junior titles.

Murphy, 32 and from Sutton Coldfield, clocked 57:32 giving her the win by 11 seconds from Team Bottrill’s Kate Allan, while her team-mate at The Independent Pedaler Jennifer George completed the podium with third in 58:59.

His time of 52:59 was more than four minutes quicker than runner-up Callum Start (Mid-Devon CC).

Chris Fennell powered his way to a narrow victory in the men’s National 25-mile Championship, winning by just four seconds to take a second National 25 title.

The Team Independent Pedaler-Nopinz rider covered the course near Cullompton in 51:37 to win by a narrow margin from Ribble Weldtite.

Pro Cycling rival Oliver Peckover (51:41), who suffered bad luck with an unshipped chain during the event, while third was Jake Sargent (FTP Race Team) with 52:06.

Following each day’s event the Wheelers went touring together in Exmoor and the Blackdown Hills.