Lambs bounce back at Heath 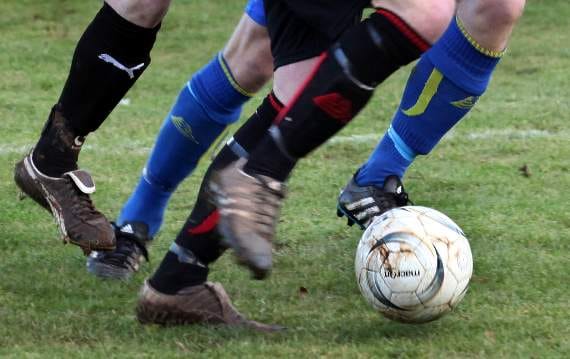 The visitors opened the scoring in the second minute when, from a corner kick taken by Dave Hallett, Warren Daw found the net with a powerful header.

Two minutes in the home team equalised when from a free kick the ball was not cleared and it fell to Moorhead who fired the ball home from 12 yards.

Play remained fairly even over the next period but it was the Lambs who began to take control. A Callum Watson thunderbolt from 25 yards was brilliantly turned away for a corner kick.

The visitors were now controlling the play with both Liam Prynn and Tallan Burns having fine efforts well saved.

The Lambs regained the lead when another passing move resulted in the ball finding Burns; he cut into the penalty area before hitting home from an acute angle.

Just before the interval, another eye catching move saw Watson put Prynn in on goal and the latter finished off with aplomb to make it 3-1 to Tavistock.

Cadbury Heath made a positive start to the second half with Carter shooting just wide of the target from 18 yards. Tom Watson in the Lambs’ goal then made a fine save to deny Moorhead from reducing the deficit.

After this short period the visitors took complete control of the game and just before the hour mark another great move opened up the home defence for Jack Crago to fire home. Tom Annear then saw his superb effort cannon back off the crossbar. Shortly afterwards Callum Watson provided a terrific pass for Prynn to score his second of the match.

With 10 minutes remaining Watson made it six with a clinical finish from the edge of the penalty area, placing the ball low into the corner of the net.

Things became worse for the home team when Carter was shown a straight red card for a dangerous challenge on Tom Annear.

The visitors though, completed the scoring when Jack Crago fired home from 12 yards for 7-2.

This was a really good performance from Tavistock bouncing back after their defeat in Street. The team played some eye catching football, their high tempo causing the home team all sort of problems.