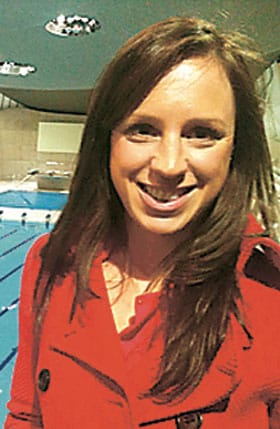 Heather Fell, Olympic modern pentathlete silver medalist, writes about her life 'on and off' the track.

Lambs out of FA Cup after defeat against Brixham

Runner-up prize for athlete who pushes himself to limit

UNTIL recently I had thought that one attended weddings in the late twenties/early thirties, christenings during the next decade and hopefully not funerals until many years later. This was obviously a misconception on my part as in not much more than a week I was a bridesmaid, held my friend's two-day-old baby and received the sad news of the death of Dennis Willcock.

Dennis, a Tavistock pensioner reached the impressive age of 94, and if he didn't proudly tell you, you certainly wouldn't have known.

I owe a huge amount to Dennis as he so kindly drove me (while I usually slept) from Tavistock to Plymouth for fencing club every Thursday night in the years before I passed my test. I must emphasise he didn't just turn up at fencing but he wholeheartedly took part, still winning fights against fencers a fraction of his age. One sport was not enough for this fit gentleman; the last time I saw him only a few months ago he was on his bicycle describing his next adventure to me. Dennis will be greatly missed but I do hope we can all learn by his example and enjoy the health benefits acquired from leading an active lifestyle - whatever our age!

It seems the end of last week could be described by a colour. Friday was full of charity spirit with happy faces sporting red noses and Saturday was full of red shirts as the Welsh erupted in celebration of their victory in the Six Nations rugby.

I might have been guilty of a little over confidence in the England fifteen when I invited a Welsh friend to watch the game with me — I am just glad we were the east side of the River Severn.