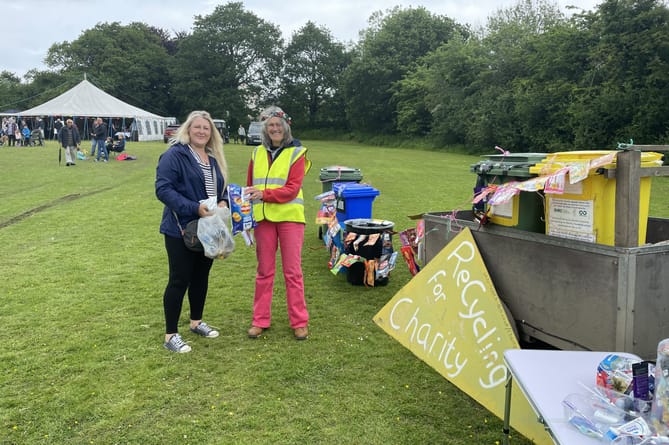 A local stalwart has been working hard during Platinum Jubilee celebrations to boost recycling in the Tamar Valley with her Recycling for Charity project.

Alison Humphreys, leader of the SHARE (South Hill Association for Renewable Energy) Recycling for Charity project recently attended the Upton Cross and St Ann’s Chapel fetes to accept donations and raise awareness of used items that can be recycled such as crisp packets, toothpaste tubes and biscuit wrappers, which West Devon Borough Council and Cornwall Council don’t commonly accept (as recyclable materials), and educate local residents about both supermarket and council recycling.

Recycling for Charity accepts items sponsored by specific manufacturers including KP, McVities, Colgate, Garnier, Warburtons, Pringles and Cathedral City, who then dictate what is sent to Terracycle – a recycling company who process the materials into new products such as garden furniture and water butts. Money is raised for charities on the shipments sent and to date, the project has raised over £7,000 for Kicks Count, a charity aiming to reduce stillbirth rates in the United Kingdom.

Alison said: ‘The vast majority of people want to recycle but are unsure about what goes where, which isn’t surprising given the amount of different plastics that surround us.

‘This project offers a different way of sorting your plastics from the supermarket or council recycling as accepting manufacturers are interested in what was in the packet not what the packet is made from. For instance KP will accept all crisps, snacks, nuts, popcorn of any make or manufacturer, Cathedral City will accept any and all cheese packets and so forth so the project is very straightforward.’

Alison attaches a trailer to her car which is loaded with labelled bins for specific items and visits a range of different locations around the Tamar Valley so people can meet her to donate their items, ask questions about recycling, hear updates about the project and meet other like-minded people.

Alison said: ‘Most people drop off monthly or every other month when the trailer is in their area. This way you can bring items you are not sure about and ask for any recycling information. Many of us have formed great friendships now. Those involved are keen to help in any way from collecting, sorting, boxing, sending items, recording and promoting. We have around 30 volunteers across our locations who have visited the council recycling site at Bodmin and the incinerator at St Dennis and enjoyed learning more about the waste collection and processing procedures.’

If you are interested in learning more about the project, recycling or to view the schedule, visit www.south-hill.co.uk/charity-recycling or Facebook group www.facebook.com/groups/recycling.for.charity or email [email protected] Alison can be contacted on 07305 044049 and enjoys attending schools, colleges, scouts, brownies and support groups to talk about rubbish and recycling. She will next be attending Duchy College on Thursday, June 30.