From a Saab to a lifeboat 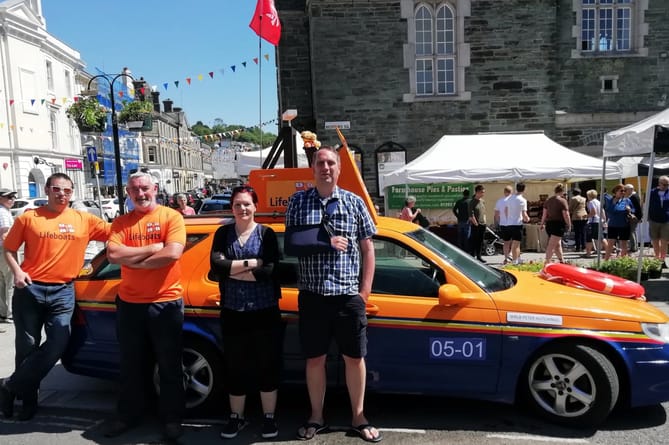 a TEAM from the Tavistock area are heading off on a road trip across Europe in a car converted into a lifeboat as part of the Wacky Rally.

Clive Pattison, who runs Drake’s Cafe at Grenofen with his wife Abbie, has spent hours coverting his 2003 Saab 9-5 estate into a lifeboat – complete with teddy bears in lifeboat apparel in the cockpit.

He and three friends and cafe regulars are preparing to head off on the car banger rally through France and Spain taking in the Alps and the French Riviera and finishing in Barcelona in Spain.

This is the second time that Clive has taken part in the Wacky Rally, which is a charity challenge which describes itself as Europe’s favourite car banger rally. Three years ago he took part in his car converted into a tank, raising money for at meningitis charity.

This time, approprately enough, he is raising funds for the RNLI.

He said: ‘We did it three years ago and had a good time we decided to do it again. Last time we went we won ‘wackiest car’ and there are about 80 cars which take part, so it is all good fun.’

This year’s rally is called ‘Barmy to Barcelona’ and sees the team cross the English Channel through the Eurotunnel and head down in a circuitous route through the edge of France and Italy, along the Mediterranean and down into Spain.

He and one of the other four members of the team are sharing the driving. ‘It is a very long way,’ said Clive. ‘By the time we get to the finish in Barcelona we will have done 2,600 miles.’

‘We leave on June 30 and the rally starts on July 1 and it finishes on July 4 in Barcelona.

‘We are going through the Eurotunnel and we start in Lille and then the first day is going down through France and Belgium, Luxembourg, Gemany and Switzerland.

‘Day two is across the Alps and through the St Bernard Tunnel to go through onto the Italian side. Then we will go down to Arles and Marseille on the Mediterranean and on to Spain.

‘We have got hotels booked in different little towns where the checkpoints are.’

The Wacky Rally is a banger rally which prizes ingenuity over funds, with all the particupants given a budget of just £500 to make their car stand out, with prizes for the most imaginative.

There are prizes at the finish, but the organisers say the experience is the thing that those taking part appreciate the most. To sponsor Clive and his team’s effort in aid of the RNLI, visit ‘Wacky Green Navy’ on Facebook.

Pictured right is Clive Pattison with his ‘lifeboat’ car, all set for the Wacky Rally.