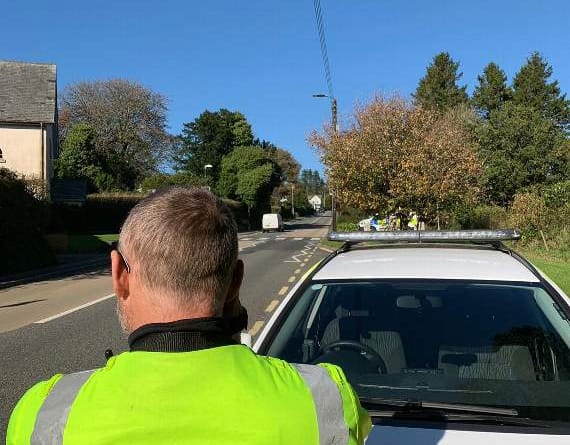 THIS week, police from West Devon have dealt with a varied number of incidents, which included knife crime, speeding cars and a rise in dog attacks.

On Saturday, March 9, a 13-year-old male was arrested on suspicion of possession of a knife in Tavistock at around 4pm. Enquiries are ongoing. On the same day, officers from Tavistock Police Station’s response team C conducted a speed watch in Horrabridge and Dousland, both 30mph zones. In Horrabridge, by the turning to Crapstone, the officers caught ten drivers going over 40mph within 40 minutes, with the highest at 47mph, and many driving in excess of 35mph. In Dousland, around 20 cars were driving above 35mph and eight over 40mph, with a motorbike being caught at over 45mph.

The previous day, Tavistock police stopped two vehicles in Morrisons Car Park. A man and woman were dealt with by local police officers for cannabis possession and a third was arrested for failing to appear at court for burglary and disqualified driving.

• Police have received a rise in reports of dog attacks in the local area — five incidents in the past couple of weeks. They ask that all dogs be kept on leads around livestock especially during lambing season. Incidents of sheep attacks or sheep worrying could result in the owner being issued with a dog control order and if this is breached then the incident could possibly be put through to court.

Keyham shootings: Family tribute a year on from tragic incident

The weather hots up but are you hot on water safety?

Tavistock Police appeal for witnesses over collision near Gulworthy

• A car parked at Sourton Cross picnic area was broken into on Friday lunchtime, March 8, between 12.30pm and 1.30pm, Okehampton Police said.

The thieves smashed the nearside passenger window to gain access, stealing several items including a handbag and credit cards. Anyone who saw anything suspicious is urged to contact the police, quoting crime reference CR/020830/19.

• A van parked in Lifton was broken into between 6pm on March 5 and 6.40am on March 6. Nothing was taken but as vans have been the target of break-ins in the area recently, police would like to remind owners to not leave anything valuable in vehicles. CR/020290/19.

• A car was broken into and items stolen from a car parked in Tavistock between 12.01am on February 16 and 8am February 18. Police would like to remind people to not leave anything on display in their vehicles. CR/020558/19.