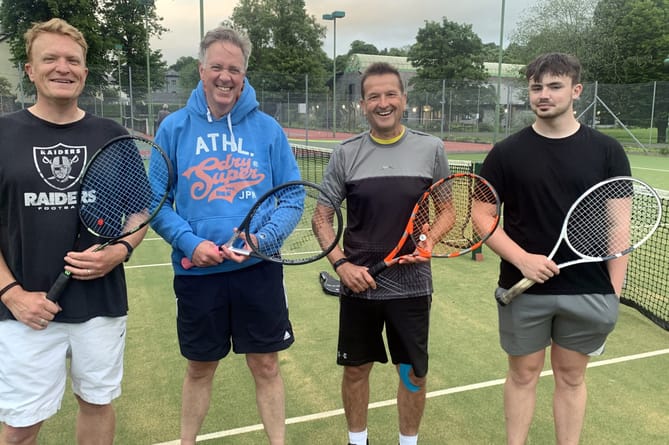 TAVISTOCK Tennis Club enjoyed another good week in the Plymouth and District League, with the A and B teams keeping their 100 per cent winning records intact.

The A team edged a close contest 47-43 against the previously unbeaten St Budeaux A side. Rhys Dunford teamed up with Myles Pinkney, making his A team debut, and split rubbers to get points on the board.

Nick Beilby and Luke Wakely cruised past the opposition’s second pair, but lost a tight match against their firsts in a championship tie-break.

The B team also posted their fourth win in a row with a solid home victory against Saltash A 68-24. Ron Temperley and Dom Floyd beat both of the away pairs 6-4, 6-2, while Kevin Siemonsma and Mike Baker also won both matches, eventually beating their firsts in a championship tie-break.

Already top of the division after three matches, the B team will consolidate this position when the latest results are published.

The C team made it three wins out of four with a near maximum score of 71-28 away to Ivybridge C. On bouncy courts, Sean George and Jeremy Hyde beat both Ivybridge pairs in straight sets, while Dave Martin and Rick Read also won both rubbers, the second on tie-break.

The Ds lost 72-13 against a rampant Devonshire B team, who have dropped only four sets in their opening three games.

Matt Smith and partner Paul Turner managed to win a set in losing a tight rubber in a championship tie-break against their first pair, while skipper Simon Church and Steve Buckley found the going tough in hard-fought defeats in the other rubbers.

The E team beat Yelverton B at home 55-36, with skipper Phil Harbottle and partner Nick Hill winning both rubbers in straight sets.

They were ably supported by Liam Downing and John White who were narrowly defeated in a tie-break against their first pair, but won their second match 6-3, 6-3.

Tavistock’s women’s A team lost 58-27 to Ivybridge A in a match which did well to survive the weather. Frances Lindsay and Hilary Picton went down to their second pair in the first rubber 6-3, 4-6, 10-8, while Lucy Hillman and Lindsey Fear lost to their firsts 6-1, 6-1.

Lucy and Lindsey also lost to their second pair while Frances and Hilary lost the first set 6-1 to their firsts, but won the second set 6-0 and also the tiebreak 10-5.

Tavistock also played Plymstock in the Mixed Knockout and beat them by three matches to one. Rhys Dunford and Tracey Morrison won both their matches, while Peter Bradley and Hilary Picton lost to their firsts, but beat their seconds.