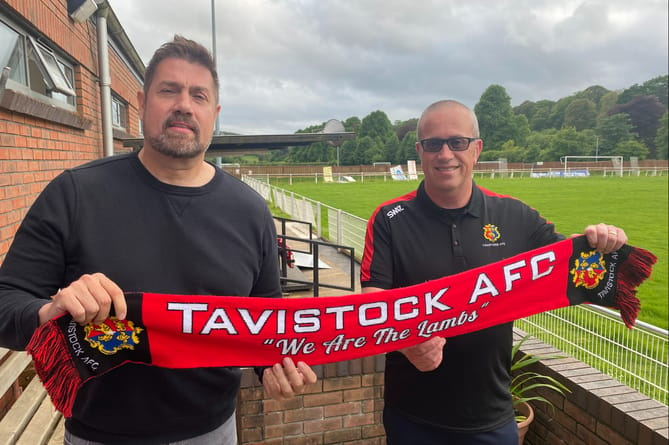 TAVISTOCK AFC are gearing up for life in Southern League Division One and are planning to introduce a Development team from the start of the new 2022/23 football season.

Stuart Henderson’s Lambs pipped Exmouth Town to the Western League title in April to win promotion to Step Four of the National League System, along with Kevin Hill’s Exmouth.

The club are keen to establish itself as a development club and offer opportunities to young footballers throughout the South West, while building relationships with clubs in Devon and Cornwall by dual registering players with them so they get regular football at weekends as well.

The likes of Lewis and Warren Daw, Josh Oak, Ben Cross, Josh Robins, Dan Evans, Tallan Burns and Liam Prynn have long been part of the first team picture at Tavistock, having joined as youngsters, while the likes of Iestyn Harris, Dan Koita, Harry Jeffery and Josh Parry have joined in the last 12 months and furthered their football careers with the Lambs.

The team will be run by local football coach Dave Ottley, who approached the club with his vision of how a development team could help the Lambs and his ideas were gratefully received by the club.

‘Tavistock’s success in recent seasons has been incredible and what we are looking to do is boost that to the best of our ability and develop talent,’ Ottley said. ‘That will have benefits to Tavistock, but it will also have benefits to football and clubs in the wider Devon and Cornwall community.

‘When we put this plan together, we did speak to several local clubs because we wanted to see how it would be received and the feedback we have received has been excellent, really positive backing because clubs are keen to work with Tavistock.

‘They can see what the management team have achieved on the pitch and it can only be beneficial to those clubs that are looking to step forward and are looking for player development, so it works all ways round.’

Tavistock have run a reserve team before, but committing to regular fixtures, home and away, in a specific league on a weekend is a costly exercise and doesn’t always serve the right purpose for a first team.

The idea of a development team is to play fewer games, scheduled for midweeks, and for the players to spend more time training with the first team, while enjoying game time with clubs from the Western League down to local feeder leagues in Devon and Cornwall.

It is also more cost effective with Ottley adding: ‘We are looking to spend quality time with these players every week and have an involved training session with the first team to give them that experience that you just wouldn’t get if you were running a separate reserve team in one of the local feeder leagues.

‘We have to remember that this is a journey, Rome was not built in a day. What we want to do is pretty much a three-year plan, so over the course of the next two years, we will get these players embedded, used to how football in the Southern League works and playing the Tavistock way and also support them in their football journey so when they do go back to their Saturday clubs, they go back as better players.

‘The absolute idea is to get those players through and developed and for consideration, if they prove themselves, for Stuart’s first team squad and also to support them in their football journey.

‘I think that’s important because there are so many local football clubs that have achieved great things this year and what we want to do is make sure that we support Stuart and the management team at Tavistock with a conveyor belt of players and for the ones that don’t quite make it, they are still involved in local football in Devon and Cornwall, playing at a good level and developing all the time.

‘We are really keen to build relationships with all the clubs in Devon and Cornwall.’

The hunt for players is well underway, although Ottley is open to more players getting involved. He is also keen for a young, enthusiastic and qualified coach to get involved as well.

‘We have a list of players that we want to talk to and these are players that we have identified right through youth football to players that have taken their first steps into men’s football, or ones that are just about to,’ he said.

‘These are players that we know well and we think have ability, so Stuart and I are both on the same hymn sheet.

‘We think they have ability and we will talk with those players over the next three or four weeks to explain our vision and what we are trying to achieve and we look forward to welcoming them in.

‘Also, we are going to be consistently looking at other players that are recommended to us and what we want to do is to give them the time to take the step over a period of months, rather than be thrust into the limelight with a huge amount of pressure on them.

‘It’s a pressure-free environment really and an opportunity to experience higher level football with better quality coaching and for them to move forward from there.’

If you are interested in getting involved, either as a player, a coach, or a sponsor of the team, then email [email protected] or call Dave on 07747 444504.