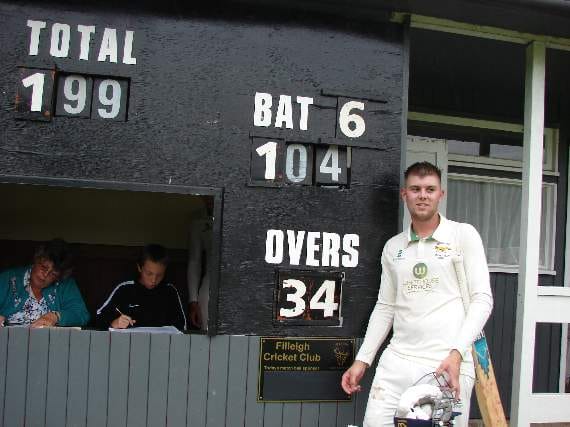 BELSTONE’s final game of the season in the league was a rain reduced 35-over encounter away at bottom of the table Filleigh. It ended up a much closer affair than seemed likely after the first half hour of play when the visitors found themselves on the ropes at 14 for five wickets.

The Belstone innings was also notable for Ryan Dennis completing his maiden century and that all seven wickets to fall were shared by the two Filleigh ladies Anna Squire and Morgan Harrison-Hooton.

Weekend to forget for Wayfarers

Warm glow to end of season at Wayfarers

Squire opened the attack and took wickets in each of her first four overs as the top order (albeit not the usual Belstone batting order) succumbed to her accurate good length deliveries. She took all the first five wickets to fall in a 14-ball spell and at one time had figures of 4.1 overs, five wickets for five runs.

The Belstone recovery began with a sixth wicket stand of 50 between Pat Ewen, who contributed five runs from 13 balls faced, and Ryan Dennis; it then continued as usual opener Phil Woods added 68 with Dennis for the seventh wicket until he was out for 30, smartly caught and bowled by Harrison-Hooton when the score was 132-7.

Dennis was batting with calm authority, mixing well-placed singles and twos with powerfully struck boundaries; he reached 50 off 54 balls and found another useful partner in Dan Fogerty who ended the 35 overs on 28 not out, scored at better than a run a ball.

Excitement mounted as Dennis approached his hundred with the overs running out; careful retention of the strike plus a productive 33rd over which went for 18 runs brought him to 96 not out as Connor Nash began the final over; a couple of pushes for twos ensured the milestone was reached off 95 balls faced, with seven boundaries and three sixes.

Needing exactly 200 for victory Filleigh openers Kevin Toze and James Tyson departed in quick succession. Tyson was caught by Dennis off Pat Ewen for 20 and Toze was unluckily run out for 15 after a throw from Fogerty was deflected onto the stumps off the boot of keeper Jack Barkwell. Jas Kalsi and Nash had a solid partnership of 69 for the fourth wicket before Callum Mallett, bowled him again for 32 to leave the score on 136 for four. Kalsi continued to dominate but Belstone chipped away with wickets at the other end with Alex Jopling taking a good catch in the deep to dismiss Butler off Tom Pengelly (7-0-39-2).

With overs and partners beginning to run out Kalsi took Filleigh to within 27 runs of victory with three overs remaining when he mistimed a drive to mid off where Pengelly took a well-judged catch to dismiss him for 65 which included eight boundaries. From that point on Belstone could relax confident that the lower order would not be able to score the boundaries needed and indeed Filleigh finished 14 runs short.