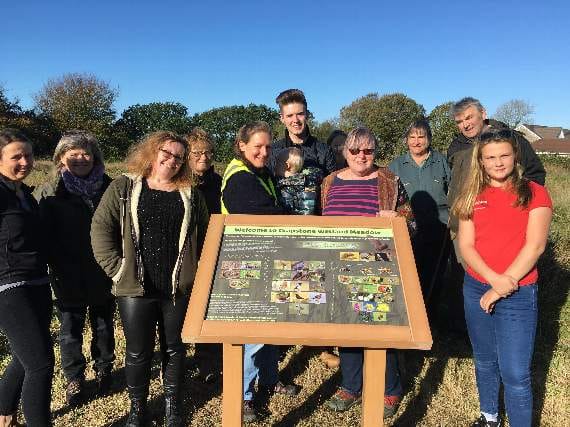 AN ‘old boggy bit’ in Crapstone’s recreation field has been nurtured to become a small conservation area.

The recreation field in Crapstone is owned and managed by Buckland Monachorum Parish Council who, in January 2018, gave a small committee — comprising three parish councillors and a few local residents — the half-acre plot of wet grassland to create a conservation area, with a generous £500 to kick start the project.

A spokesperson for the committee said: ‘Our first job was to get Tavistock task force out to clear some of the brambles and rushes so we could get an idea as to what we were going to do. Devon Wildlife Trust had been down and had suggested a plan of action and our local, well-known landscape gardeners had been and suggested a selection of trees, shrubs and flowers that would look good and increase the biodiversity of the area.

‘With the help of local residents, we planted trees, shrubs and some water-loving plants, some of which had been donated to the conservation area.’

The committee received further funding from Devon County Council and the Tamar Valley AONB and with money raised from a stall at Buckland Village Hall coffee morning and the village fair in June, it was able to purchase a hedgehog home and a couple of bird boxes as well as an information board, supplied and fitted by Green Scheme, to tell visitors all about the wetland.

The spokesperson added: ‘The wildlife on our doorstep is amazing and so varied, we hope that next year we will have even more to share with everyone. Volunteers are always welcome so if you are interested in wildlife conservation, email [email protected]