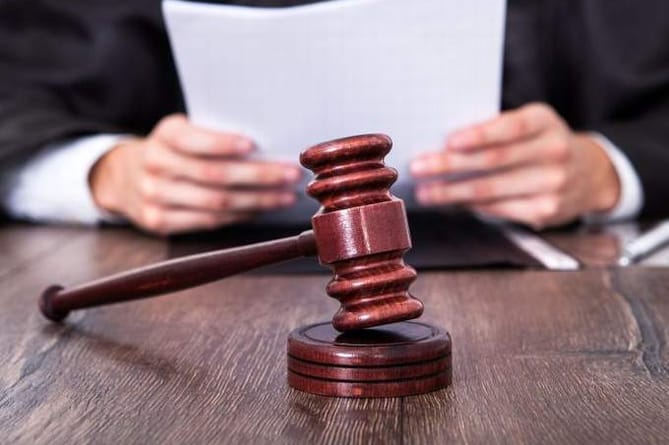 A driver who crashed into a police car on a Dartmoor bridleway tried to lie his way out of trouble by claiming it had been stolen.

Jez Kirby drove to the isolated spot between Belstone and Sticklepath to take drugs but locals were alarmed at seeing his car on the narrow path and called the police.

A patrol car boxed him in and an officer got out and tapped on his window, causing Kirby to reverse and then try to drive round the police car by mounting a grassy bank.

His Renault Clio slipped down and hit the side of the police car but he sped off and evaded the police. He later reported that the car had been stolen earlier that day.

It was found burned out in Fingle Woods, near Drewsteignton the next morning and Kirby signed a police statement confirming his dishonest account of its theft.

Officers were able to unravel his web of lies because the constables who stopped him on Dartmoor were able to identify his picture from police files.

Kirby, aged 27, from Moretonhampstead, admitted perverting the course of justice, leaving the scene of an accident and failing to report an accident.

He was jailed for 13 months, suspended for 18 months by Judge David Evans at Exeter Crown, fined £500 with £500 compensation and had ten points endorsed on his licence.

The judge told him he was suspending the sentence because Kirby is working, has family responsibilities, and has made good progress on a previous suspended sentence imposed for an unrelated assault.

He said: ’This was a deliberate attempt to deceive the police by making a false report to avoid liability for the collision. It caused the use of some police resources.’

Mr Tom Bradnock, prosecuting, said police were called to a suspicious car on the bridlepath south of Tongue End, near Okehampton, on December 7, 2020.

They parked up nose to nose and an officer went to bank on the driver’s window, causing Kirby to reverse and try to get around the police car via a grass slope.

His car slipped during the manoeuvre, causing it to slide into the side of the police car and cause £1,815 damage. He then sped off and made his false report of theft.

The burned out wreckage of the Clio, which was insured in Kirby’s name, was found at Fingle Woods the next day.

Mr Deni Matthews, defending, said Kirby had gone onto Dartmoor to take drugs because he did not want his young family to see him doing it at home.

He said he made the foolish decision to lie to the police because he was worried about his forthcoming sentencing hearing for the earlier assault.

He had worked well with probation and the drugs service since that was passed and was fully employed as a decorator specialising in ornate plaster work.

His focus was now on staying out of trouble and supporting his family.