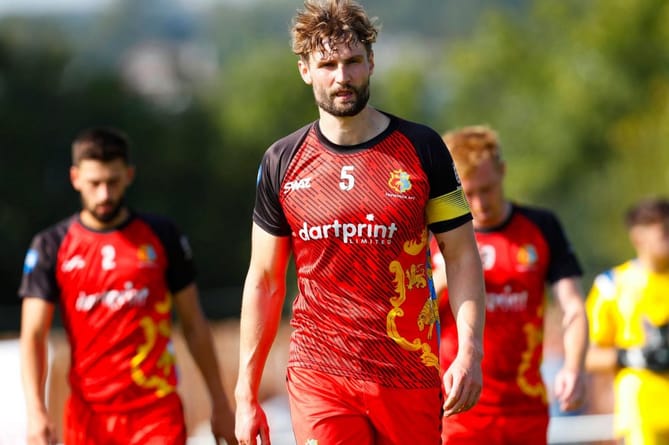 LEWIS Daw had decided to step away from football after nine years as captain of Tavistock Football Club.

Daw, who turns 32 in August, has been an outstanding leader on the pitch, leading the club to four league titles, three in the South West Peninsula League and last season’s Western League title triumph, while he’s been an ideal captain off it, arranging the players’ end of season dos.

But the long-serving defender now has a family and following the club’s promotion to the Southern League – and with the extra travelling involved with away games – the hugely popular stopper has decided the time is right to take a step back and focus on other things in his personal life.

“I just feel the time is right,” Daw said. “When we had the two Covid seasons, I started to feel like I was getting my weekends back and I realised how much I was enjoying it. I was finishing work on a Friday knowing I had all weekend to do what I wanted to do and it opened my eyes.

Lambs out of FA Cup after defeat against Brixham

Runner-up prize for athlete who pushes himself to limit

“We then had that stop-start spell and really, as a centre back, you want a run of games to get your form and your fitness right because you know that if you make a mistake, you concede a goal, don’t you?

“I had my Achilles injury in 2019 and it took me so long to recover and it still isn’t right. Every time I play, I have to do pre-hab and a proper warm-up and my lifestyle, away from football at the moment, is very different to what it was before Covid.

“I got promoted at Christmas and have quite a tough job, I have a little girl now and I just don’t have the lifestyle now that allows me to fully commit like I used to. I used to be one of the fittest players on the team, first one there and last to leave and now it feels like a complete role reversal.

“It feels like a chore to get there, juggling childcare and dropping my daughter off with all her stuff to someone. Then rushing to make the coach and then when I get home, I want to get back as soon as I can whereas before, I’d stay with the team and organise a night out with the lads!

“Life changes, doesn’t it? If I could fully commit, then I’d love to give it a go, but I just can’t. It’s funny, in the Saltash friendly, my boot split – the heel of the boot fell off – and I just thought: ‘that’s a sign!”

“I was going to say after we won the league that I was gone, but then I thought I’d give it a go. I’m just not enjoying it and I have so many hobbies and interests outside of football that I so rarely get to do because football is so consuming.

“It’s training, every Saturday, then evening games and now the extra travel. I’ll keep myself fit and I have said to Stu that if ever he needs me, I’d help out if I’m available… but I see this as an opportunity now to spend time with my daughter and enjoy other things.”

Manager Stuart Henderson believes Daw’s contribution over the last nine years makes him a Tavi legend – and few would argue otherwise. In a glowing tribute, the manager said: “For me, there are no better captain’s.

“I don’t know every captain locally, but you don’t find many like him. It isn’t just what he has done on the pitch, but more so what he brings to the changing room – we all go away on holiday at the end of the season and he is responsible for organising it, bringing everyone together, collecting the fines team nights out, fancy dress.

“What that brings is a massive spirit to the group which then translates onto the pitch in terms of performance.

“Lewis was at the club when I first came but what he’s brought to the dressing room in my seven years – and in terms of the team performance – has been invaluable.

“He’s made a massive contribution to our success and he will be remembered as a Tavi legend, there’s no doubt about it. I’d imagine he’s the most successful captain in the club’s history.

“Most of all, he’s a great lad. He had a big injury, which he came back from and has just had his first child. I am obviously disappointed that he can’t carry on, but we fully respect his reasons and I don’t think he will be a stranger as he’s such a good friend to me and a lot of the players in the squad.”

Everyone at Tavistock wished Lewis and his family every happiness for the future. Lewis’ success and contribution is immeasurable and he and his family will always be welcome at Langsford Park.

Once a Lamb, always a Lamb!