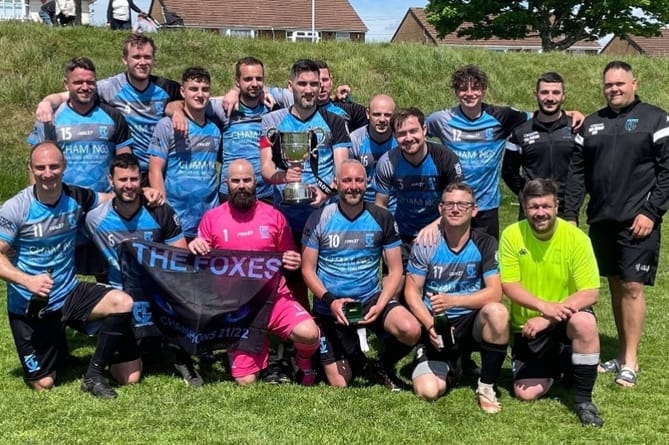 TAVISTOCK has a second team who want to push themselves as far as they can go — even though they are not based in the town.

While Tavistock FC won promotion to the Southern League with the last kick of their season, another humbler club based just down the road was doing much the same thing.

Tavyside FC, formed just two years ago by Tavistock’s Paul Cowling, had to win their final match against Plymouth and West Devon League division two outfit and promotion rivals Central Park Rangers to reach the first division and did just that with a winning goal from captain Graham Galway.

Like the Lambs, their bigger cousins, who won promotion thanks to a late penalty from Liam Prynne, manager Cowling is looking forward to the future with some optimism after an astonishing first two seasons.

Cowling, who is assisted by Mike Waldren, wants to get his side into the Plymouth and West Devon League’s Premier division - and has high hopes of starting a second team to develop local youngsters.

He is already proud of the fact that at least 80 per cent of his 25-man squad is Tavistock-based, even though the club itself is based in Mary Tavy at present.

Cowling, who started the club because he wanted to give something back to the town after 30 years in local football, said: ‘We went to Mary Tavy because there were no pitches available in Tavistock which we could afford, being a small club, so I would jump at the chance of coming back to the town if a pitch did become available because most of our players are from Tavistock.

‘We also want to encourage younger players in the area to make that jump to adult football, which is one of the reasons we are looking at a second team.

He added: ‘We were really pleased with the way our first season went, because we finished fourth and we had a good run in the cup.

‘To win in our second season was brilliant, although the last game was a bit nail-biting, to say the least.

‘We had to get two points from our last two games to be champions. We drew the first one, against another of our rivals, Devonport and won the last one against the only club, Central Park Rangers, who could win it off us and we beat them.

‘Now we’re looking to go up again into the Premier, because unless you look forward, there’s not a lot of point in doing it.

‘We want to push on and give the town another team which they can be proud of.’

Cowling paid tribute to the local sponsors who had backed the new venture and added: ‘We need them, because they’ve all helped us to survive.’