Nine-man Odd Down thrashed by Tavistock 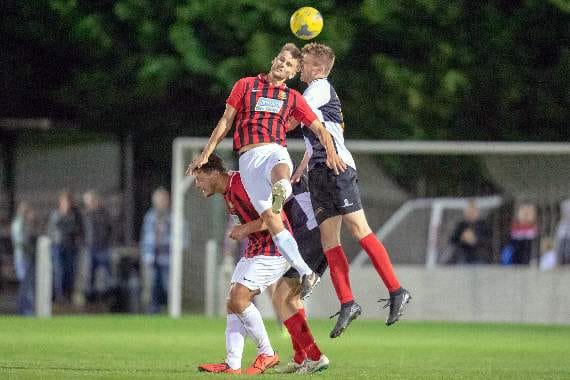 The Lambs bounced back from last week’s defeat against Bradford Town with a convincing victory away in Bath.

The travelling side were without the services of keeper Josh Oak (work) and the injured trio of Calum Watson, Dave Hallett and Warren Dawe – as well as Dan Evans who is suffering from a long-term ankle injury still awaiting an operation.

However, it gave one or two fringe players the opportunity to start, with Alex Cairo wide right and Reece Shanley coming into midfield. It still looked a formidable line-up with a strong bench.

It appeared to have been awarded, but the home side’s management thought differently and after the referee and assistant had words it was not given.

It was to be a short reprieve, though, as on 13 minutes Aaron Bentley rose high to head home Tyler Elliott’s corner to open the Lambs’ account. The visitors continued to apply the pressure when from a third consecutive corner Lewis Dawe saw his effort cleared off the line.

Moments later the home side drew level as Lewis White got to the byline to cut back for Jacob Redden to bundle the ball over the line.

Five minutes later the Lambs restored their lead. Ben Cross picked up a loose ball to set up Cairo to cross for Jack Crago to powerfully head home. More pressure from the Lambs continued but again the home side, through White, saw his effort go just over the bar.

The visitors then put the game to bed before the end of the first half. Crago’s low cross was partly cleared for it to fall at the feet of Grant to curl in an effort at the far post.

On the stroke of half-time, a Josh Robins cross-field ball found Cairo on the corner of the penalty area, to send in a looping header that eluded everyone including Heal to nestle in the net to make it 4-1.

The second half was just 10 minutes old when it went from bad to worse for the home side. Cairo was in on goal and was fouled by Archie Morris, who was subsequently sent for an early bath.

From the well-rehearsed free-kick, Grant’s effort was fumbled by Heal and Annear’s effort somehow went over the bar from very close range. Cairo was having a good game, with the home side dishing out some hefty challenges.

On the hour the Lambs made it five, with Cross getting to the byline to cut back for Annear to make amends and shoot low into the net. Substitutions then came for the away side, with Tallan Burns coming on for Crago. He made it six with his first touch. Luke Brown also came on for Elliott, and Liam Prynn for Dawe.

A second sending off for the home side did not help their cause, with Jacob Bird having to go for a second yellow. With 15 minutes to go the Lambs wound up a convincing display with their seventh goal. Burns again got to the byline to send in a low cross for Brown to stroke home from close range.

The lambs were due to travel to Wellington last night, before welcoming Odd Down to Langsford Park for the return fixture this Saturday (3pm).

There will be a coach going to Lymington on Saturday, October 31 for the First Round Proper of the FA Vase. It will be leaving the club at 9am. To book a seat, send names to Eric via a Facebook message or the Tavistock Football Club Facebook page.