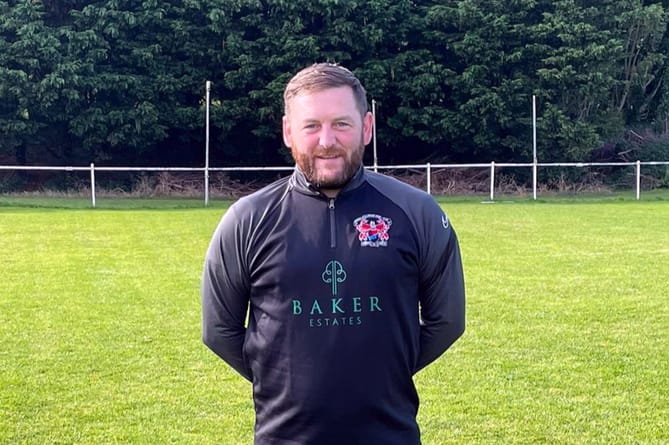 CALLINGTON Town manager Shaun Vincent has committed himself to the club for next season after his assistant manager departed for St Blazey.

And despite interest in his managerial services from elsewhere, the Ginsters Marsh boss says that he isn’t planning on going anywhere – and nor are most of his squad.

‘This period is often the busiest and most stressful,’ said Vincent this week. ‘Clubs are always after players and can come after managers too.

‘I had a couple of offers on the table but neither of them really suited me. Callington have been great to the lads and I in terms of giving them a second chance, so they deserve our loyalty.

‘Having that stability is good as well – shifting clubs again wouldn’t necessarily be a great move. I certainly don’t want to be labelled a journeyman because that’s not who I am.

‘It will be great to build on what we did last year and capitalise on the momentum we gathered on that mid-season winning run.

‘I’d say 85 per cent of the squad has committed for next season too, so I need to work hard over the coming weeks to bring some additional players in.’

News of Fice’s departure to take up the manager role at St Blazey broke at the end of April. While being disappointed at the news, Fice goes with Vincent’s best wishes.

‘Ficey is a great coach and we have been best friends for 30 years,’ Vincent explained. ‘An offer was put on the table for him, and I’m sure that in his heart of hearts he would’ve liked for me to go with him.

‘I told him that I wasn’t going to stand in his way if he felt like it was the right move for him. He’s taken a coach with him as well, so that leaves me with a bit to do over the summer.’

On Monday the club announced Fice’s replacement on the sidelines in the form of Paul Edwards, who Vincent has worked with previously.

‘Paul started out at Plymouth Argyle in the 80s and has played in two Wembley finals,’ Vincent said. ‘He has a great pedigree and a winning mentality, which is really important.

‘When Ryan [Fice] and I were at The Windmill he played for us there for a season and he was magnificent.

‘His son Matt has played for me too, so when Paul offered me his services it was an offer I was more than happy to take.’

In terms of targets for the 2022/23 campaign, Vincent is optimistic that his side can still make a push for a high finish despite the backroom shake-up

‘If we can get into the top five next season, with everything going on around re-structures there’s a good chance we could end up in the Western League,’ Vincent added.

‘With the players who have committed to me, plus hopefully a couple of quality additions over the summer too, I don’t see any reason why we can’t push to finish up there.

‘At one point during our winning run I think only Falmouth were above us in the form table, which shows what we were capable of at that point.

‘Ultimately the season fizzled out a little bit, which we were disappointed about, but there were definitely factors there which led towards it.

‘The players had already given everything, we found ourselves without our two top scorers and by that point the rumours around Ficey had began to float around.’

And he added: ‘The committee were delighted that I’ve committed to the club. They said they would have been devastated if I’d left, so it’s time to get all of our ambitions on the same page.

‘We have some good friendlies pencilled in for after pre-season starts at the end of June, so hopefully we can build on taking Callington Town even higher.’