Tom stops off in Yelverton on the home straight 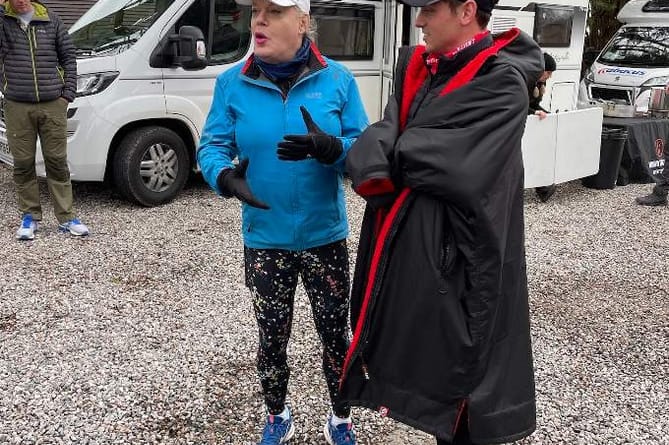 Olympic athlete Tom Daley made a pit stop at The Burrator Inn in Dousland today on the home straight of his four day challenge for Comic Relief.

Olympic Diver Tom, 27, has this week been completing a four day challenge entitled ’Tom Daley’s Hell of a Homecoming’ which has involved rowing, cycling, swimming and now running from Queen Elizabeth Olympic Park in Stratford, London to his home town of Plymouth to raise money for Comic Relief.

Tom had run 17 miles before reaching the pub and went on with a further 13 to complete. Tom was joined by impromptu guest Eddie Izzard, who ran with him from Princetown to Roborough. Tom was then joined by mother Debbie at the Dartmoor Diner for a small stretch of his run which finishes at The Hoe in Plymouth.

After receiving a sports massage when stopping at the pub for a brief respite, Tom said: 'No matter how long it takes me, I’m going to cross that finish line. Dartmoor weather, the wind, rain and hail have been atrocious. I’ve had all the elements over the past two days.

'I’m doing this for comic relief and for the amazing causes they support. Whatever people can do to donate, it would be really appreciated. Eddie’s been with me for a while, it’s great to to have someone to talk to. The whole experience has been amazing.

'This is the hardest thing that I have ever put my body through - there’s no comparison to the diving training that I’ve done. Endurance is a whole different ball game, it’s long, it’s exhausting and doing it back to back has been one of the most intense things I’ve ever experienced.’

Eddie Izzard said: 'Tom’s faster than I am! It’ll be crazy by the time we get to Plymouth. The tips I could give him are more holistic. He’s sorted, he’s got people helping him and he’s in the zone. If anything, I’m helping to take his mind off things.

'He’s just got to keep powering on. His endorphins will be swimming and they’ll keep him going to the finish line. He’s an Olympian so he’s built differently but it will get harder the closer he gets to the end. He just needs to keep listening to his body.’

Mangers of The Burrator Inn, Mike Cekalla and Ali Campbell said: 'We were really pleased to support Tom in his fantastic challenge and we wish him all the luck on the remainder of his run today. Thank you so much too to all the locals and residents who came down to the pub to show their support - it’s been a very exciting day.’