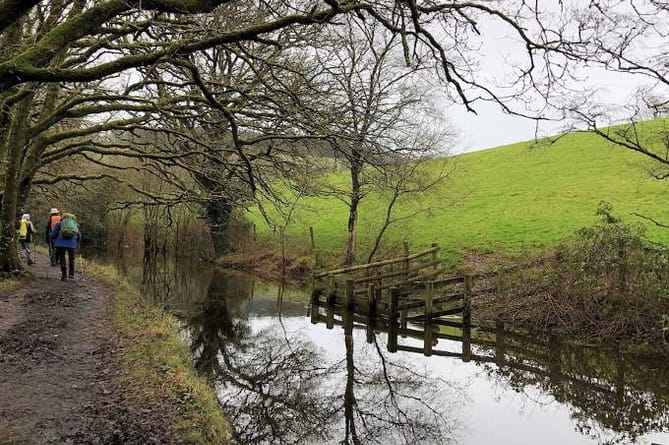 Okehampton Rambling Club members reported their ‘second worst walk’ of the year after the heavens opened on their first walk of the New Year.

The group of 12 setting out on the first Sunday of the year expected some rain but hadn’t anticipated what was agreed as the ‘second worst walk’ since the washout walk in July last year.

It was dry as they left the post office and the sun even shone as they walked along Ball Hill but by the time they reached Tor Down heading for Belstone the rain had set in for most of the walk.

Here, a group of five peeled off towards West Cleave to take a shorter less-exposed route back avoiding the longer trail of about eight miles (although they couldn’t avoid the weather!)

The main group headed out of the village to join the well-used path between the River Taw and Belstone Tor turning off opposite Taw Marsh just after Irishman’s Wall. In driving hail, they climbed the saturated track up towards Winter Tor.

The ascent proved to be a relentless, joyless, slushy slog as they battled against the forces of nature.

Ever optimistic, they comforted themselves with the thought that they were already halfway round.

As the group reached the top and looked down to Winter Tor, they were encouraged by a hint of brightness ahead. Sure enough, as they found the shelter of the rocks, the clouds lifted.

In the space of five minutes the driving rain had stopped to leave blue sky and sunshine for a perfect lunchtime break. Well, it didn’t last!

After lunch they set off down to Cullever Steps on a path running in water. The wind, rain, and hail began to batter them again. It was yet another day which proved their waterproofs were no match for Dartmoor.

The ramblers returned via Lower Halstock Farm, Klondike and Station Road and down through the park.

After last week’s deluge it was good to be out on a dry day for an easy eight-mile walk in Tavistock on Sunday, July 9. Better weather and an easy figure of eight route encouraged 22 members out, but maybe the promise of mince pies and mulled wine at lunch could have played a part.

From Bedford car park the walkers took the riverside path passing the remains of the Benedictine abbey close to the salmon leap constructed at the weir, which allows salmon and trout to return to their spawning ground. The group then walked through the town and up Old Exeter Road joining a path which led them on to one of several viaducts which had carried the London to Plymouth railway. Here they stopped for coffee.

Returning down the hill they branched off to join a track passing the old Tavistock North station which was closed in 1968, before reaching the imposing viaduct built by Brunel in the 1850s which towers over the town.

From the viaduct they could look across towards Bannawell Street and the old Tavistock Union Workhouse which housed 300 inmates. Built in 1837 for £5,000 it has now been converted into flats.

The walkers followed the railway line to the end making their way back down to the park. Lunch was enjoyed at the bandstand with hot mulled wine and mulled cider and delicious mince pies made and provided by the walk leaders. After lunch, the group had an easy four-mile canal walk, muddy in places and with just a spit of rain towards the end.

This canal is unusual as it has a slight gradient to ensure a flow of moving water which powered several waterwheels.

The canal took them beside the birthplace of Sir Francis Drake and a little further on they passed under the Grade II listed Shillamill railway viaduct built in 1889 which stands 700 ft above the river Lumburn.

Tavistock canal was constructed to transport copper, tin and lead mined at Wheal Betsy and Wheal Friendship and carried other goods too.

Although the canal was built to Morwellam Quay, it is now closed off at the ‘End Game’ sculpture where the group turned to retrace their steps.

Some members were fortunate to see the resident kingfisher successfully dive, and all enjoyed reading poetry created by pupils from Tavistock College carved in wood along the route.

Okehampton Rambling Club members meet every Sunday morning at the post office in George Street, Okehampton ready to leave at 9.30am.