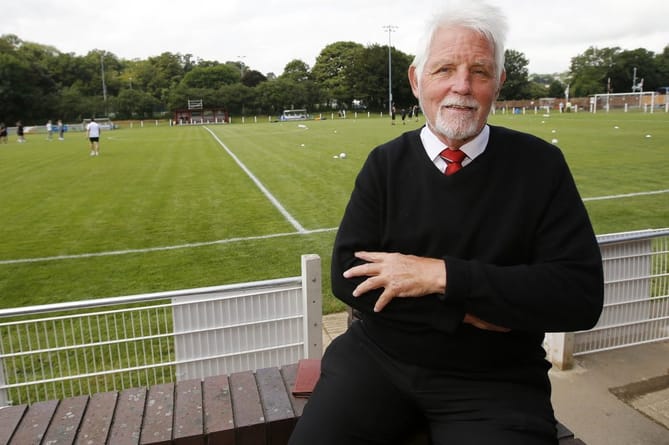 TAVISTOCK AFC is seeking new people to lead the ambitious club into a new era following the departures of chairman Paul Stapleton and secretary Barry Jackson.

It was confirmed this week that both men handed in their resignations towards the back end of the 2022/23 season.

‘This was accepted by the executive committee as the Lambs seek to put in place a management structure that can see the club grow and establish itself as a Southern League club,’ said a spokesperson on Tuesday.

In the interim, vice-chairman Martin Williams has taken on the chairman’s role and press officer Stuart James is deputising as secretary until more suitable candidates for the positions are found.

When former Plymouth Argyle chairman Paul Stapleton joined Tavistock in July 2020 as chairman it was considered a major coup for the club.

Stapleton spent the best part of eight years as chairman of Plymouth Argyle FC between 2001 and 2009, and together with manager Paul Sturrock took the club to new heights with two promotions to the championship league.

At the time, Tavistock AFC said: ‘The club has done an exceptional job to secure the services of someone who has been there and done it at Devon’s leading professional club.’

Stapleton’s knowledge and experience would be vital, the club said, in helping the Lambs in their desire to move up the leagues.

Tavistock AFC is now welcoming applicants for both the roles of chairman and secretary as it looks forward to life in Division One of the Pitching In Southern League following its championship success in the Toolstation Western League Premier Division.

‘For the role of chairman, we seek someone with a passion for football and who is familiar to the town of Tavistock,’ said the club.

‘We also seek someone with excellent organisation and administrative skills and a passion for football for the role of secretary.

‘We are also delighted to announce the appointment of Dave Pearce as our new interim treasurer. Dave will take over the role from Chris Fenner, who has decided to step down from the position.

‘We thank Chris for all his hard work and are delighted that he will remain a part of the football club and continue to be a key sponsor through his businesses, Dartprint and Inkprint.

‘We are extremely fortunate to have someone of Dave’s financial calibre and significant business experience in senior roles to be joining our team, who is also a regular supporter of the club and attends all our home games.

‘Furthermore, we are also delighted to announce the appointment of Stuart Morrison as the club’s commercial manager on a short-term basis.

‘Stuart will oversee our commercial operations over the next three months while a more permanent appointment is sought.’

For this role the club is looking for an outgoing and sociable character, preferably with commercial experience and an understanding of the town of Tavistock, its business fraternity and the surrounding areas.

‘With the introduction of a development team, and retaining all our talented and existing first team players, these are exciting times for the Lambs as we head into the Southern League for the first time in our history and we are very much looking forward to the 2022/23 season.’