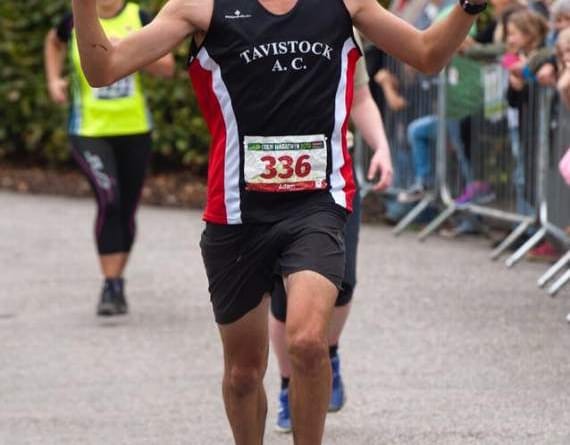 ADAM Holland, running for Tavistock Athletic Club, continued his return to fitness and winning ways when he competed in the Eden Project Marathon on Sunday.

The Eden Project marathon and half marathon had more than 1,000 finishers take on the tough, hilly multi-terrain course (a mixture of lanes and off road paths.

Adam had won the event in 2016 and was determined to try and repeat the feat – going out hard in the early stages and leading from gun to tape. His time of 3hrs 00mins 52secs was a massive 13 minutes ahead of second place. But due to the terrain it was well outside his best this year of 2.27 set in Paris in April.

He said of the achievement at Eden: ’Despite the hilly and muddy conditions, it was great to be back in Cornwall and competing in this event at the iconic Eden Project. I was happy with my time of 3 hours (3 hours 00 minutes 46 seconds).

Another Tavistock AC stalwart Pete Bazley also took on the marathon and finished in a very creditable 4.20 finishing second in his category (veteran 60) by just two minutes.

In the half marathon Sarah Holland (no relation) followed on from her debut in club colours two weeks ago by achieving an excellent 2.12,12 over the energy sapping course to finish in 445th place out of more than 800 runners.

Not content with one marathon win this week, Adam is competing at Princetown, Dartmoor on Saturday (October 21). The Dartmoor Prison Break Ultra running event, challenges competitors to run as far away from Princetown prison as they can in 24 hours.

Of the event Adam said: ‘I have been looking for my next epic challenge, and this is it, I am aiming to start running from Princetown at 12 noon on the Saturday and reach Stonehenge by mid-day on the Sunday’.

The event raises money for Dartmoor Search and Rescue.