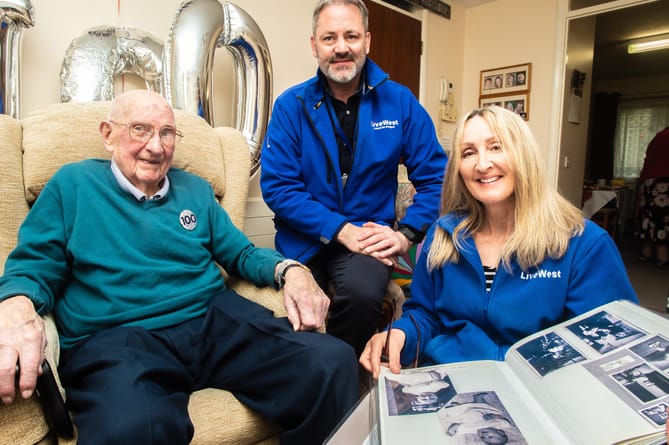 A SECOND World War veteran from Yelverton has celebrated his 100th birthday surrounded by friends and family.

He served in the Second World War as a minesweeper, putting his life at risk by identifying explosive devices.

After serving for six years in the Royal Navy, Frank returned to Devon as a mechanic before finishing his career at Devonport Dockyard where he was a machinist.

Frank retired at the age of 64 and celebrated 66 years of marriage to his wife, Margaret, who passed away in 2009 at the age of 87.

Frank, one of four brothers, has two children – Tony, 75 and Carol, 71 as well as five grandchildren and eight great grandchildren. He still lives independently at a sheltered housing scheme in the town run by housing provider LiveWest.

He said: ‘I had a happy upbringing in Horrabridge and couldn’t wait to leave school to do my apprenticeship in mechanics.

‘The war started, and I joined the Royal Navy but it meant I didn’t see my wife for four years.

‘My job was to sweep for mines. It was dangerous work, but everyone had to muck in during the war.

‘I saw things in the war that I never want to see again, and it is upsetting to see what is going on in Ukraine at the moment.

‘One of the best pieces of advice ever given to me in my life was from one of the captains, who was fighting in the war.

‘He said to us “stand your ground and watch each other’s backs, as you never know when you will need to rely on someone”. It has stuck with me ever since.

‘As human beings, we rely on each other for support and help and you won’t get very far without getting on with other people.

‘I was relieved to leave the navy as it meant I could be with my wife again and we had a very happy life together.

‘I loved being a mechanic and enjoyed my work at the Dockyard, but my eyes started to let me down in the end and I had to retire.’

A passionate gardener in the past, which saw him win a number of trophies, and a loyal father to his two children, Frank has always vowed not to go into a care home because he loves living independently.

Frank added: ‘I could have packed in living on my own years ago and be looked after.

‘There was no way I was going to do that, I am better off by myself. I have got no one to fall out with then.

‘I have got great support around me from my family and Wendy from LiveWest is a lovely girl who helps me and makes me laugh.

‘It was lovely of LiveWest to give me some flowers, a cake and some strawberries on my birthday. It was a really nice gesture and it shows how much they care about their residents.

‘I can’t read anymore because of my eyes but I do watch a bit of television. Most days, I have a little wander around my flat and try and do some DIY. It keeps me busy.

‘It’s great to get a card from the Queen on my 100th birthday, it’s the second one I have had from her as I got one when me and my wife celebrated 60 years of being married.’

Asked about the secret to a long and happy life, Frank added: ‘I have not done anything that others aren’t doing.

‘I do love a sirloin steak and haven’t eaten fried food for years.

‘I used to love gardening and watching a bit of football. I am a Manchester United fan but they’re not doing that great at the moment.

‘What I would say is that I don’t let anything bother me. Life is too short to get stressed about things. It is all about enjoying every day you have and making the most of life.’

Wendy McLean, scheme manager for LiveWest, said: ‘Frank is a remarkable gentleman, and we are delighted to be able to provide him with some gifts on his special day.

‘He has such a positive outlook on life and is an example to us all. We were thrilled that all his family from around the country were able to join him to celebrate a truly wonderful achievement.’